This was an exciting one: cutscenes! I initially had literally no idea how to do this, and it took a good while to figure it out and get a lot right. I had to learn Unity Timelines, and I grabbed the free asset Cinemachine to handle the cameras (which I do have a few issues with; you’ll see the jump at the end of the cutscene when it transfers to gameplay). That jump was mostly remedied later on, but it’s very difficult to fix, and so I will be looking for other ways, possibly just Game Creator cameras, to construct these cutscenes.

Timeline, however, is a cool little tool built into Unity, and I also learned some animation using this as well! The door, for example, was something I quickly modeled with ProBuilder and animated in timeline to open and close (and timed the sound effects). I also got to animate the lights which was fun, but it was a little challenging to get the sound effects to line up just right.

This was also the first time I was able to use the Dialogue system from Game Creator, which I will make a video of at some point as I had to set it up very specifically to get it to do what I wanted using the character avatars. It’s not very apparent here but it will be when I start showing two characters interacting (which I have practiced with but not made anything official for yet).

You’ll also notice that Allison is finally the main character! It was around this point I decided to scrap the idea for a separate demo and started constructing this how I wanted the game to start canonically. Of course the story and dialogue needs so work but it’s early yet ;D

Vandal the Obstagoon'a photos from #sacanime2023! Thanks everyone for a great con!
Meet Vandal the #obstagoon! He finally made his debut at #sacanime2023 and he was a hit! He has a moving jaw and head, El panel (glowing) eyes, sound effects and music, and a fan installed in the neck for ventilation as well as a lot of reticulated foam and hollow areas for extra heat reduction.
Goon feet + hands are done!
Testing the movement and SFX of my #obstagoon #cosplay with most of the foam finished! THIS IS STILL A WORK IN PROGRESS #cosplaywip, I still have some things to tweak, like his ears, the other side of the vest front, and the way the hands attach to the arms. I also need to make the legs/bodysuit. I also now know I need to alter the buttons in his arm because I can't actually press them myself xD So I'll need to place them elsewhere. I can't see down so although I can press the buttons if I really try, its hard to see what I'm doing and actually find them.
Hildr neck movement test! Side-to-side movement pivots nicely from the back of her head instead of the wearers (which can often make long-neck creatures move funny). Next is hooking up the jaw and building out the new musclesuit!
Had a great #halloween this year with the fam! Completely finished Carlyle's refurbishment and excited to have this character wearable again!
IG cropped the teaser image weird, so since you can't read it in the image, this is a PRE-ALTERATION photo; I haven't done anything to her yet but work on her is currently in progress! I'm so excited to work with this cosplay and give her some amazing upgrades!
I've had this on YouTube for a while and later realized I hadn't uploaded here, so, here it is! Vandal's working mechanical headbase!
Vandal the Obstagoon portrait! 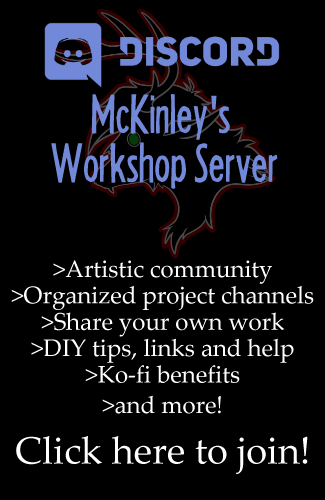